The Kent Federation of Philatelic Societies
retain the Inter-Federation Trophy.
This competition was displayed at the 2009 Autumn Stampex.
The K.F.P.S. entry was made up of  three 16 Page Competition entries.
1}  AEROPHILATELY.      John Crowe.
The Trailblazers – Pioneer Flights of the England-Australia Route.
83 Points  -  Large Vermeil. 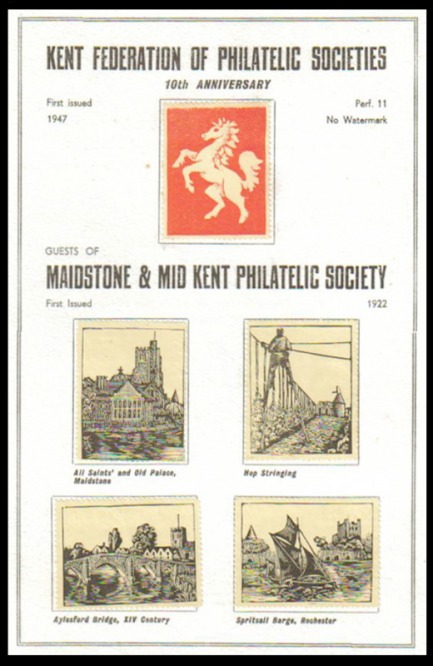 In November, 1946, the formation of a County Federation for the Kent Philatelic Societies was under consideration, and a preliminary meeting was held at Maidstone to which representatives from several Kent organisations were invited. As a result, it was decided to proceed with the idea, the Maidstone Society undertaking to do all the preliminary arrangements.
On 12th April, 1947, a meeting was convened at Maidstone where the Federation became an accomplished fact with 14 societies deciding to join and the Constitution and Rules passed.
An annual Convention, called “Kent Federation Day” has been held ever since, taking place at Folkestone, Ramsgate, Tunbridge Wells, Whitstable, Rochester, Canterbury, Sidcup and Maidstone. Special Rallies have also been held at Ashford, Tunbridge Wells and Sevenoaks.
A Challenge Cup presented by Mr. Grant is keenly completed for annually between Societies, and has so far been won by Isle of Thanet, and Gravesend (twice each), Whitstable and Cinque Ports.
The Federation has a list of speakers willing to visit the Societies and has done much useful work in bringing the Kent Societies closer together. There have been three hon. Secretaries : R. G. Clark (Maidstone) 1947-50, T. H. J. Slocombe (Whitstable) 1950-53 and V. A. Daniels (Medway Towns) since 1953.

The attendance at this special lunch to commemorate the 60th anniversary of the Kent Federation of Philatelic Societies was 43, representing 18 of the 22 affiliated clubs.

The food and company were excellent.

We were very pleased to see David Parnall, a Past K.F.P.S. President (1963-1964) at the lunch, who donated the Parnall Thematic Trophy to the K.F.P.S. many years ago.

Any further information to be included on this site can be forwarded to KentPhilately@aol.com
Designed by Michael R Thompson.
Please take a look at my very detailed web-sites.
To view - Please click on the web site address
http://www.acmrosh77.jimdo.com
http://www.UK-PostalHistory-Postcards.jimdo.com