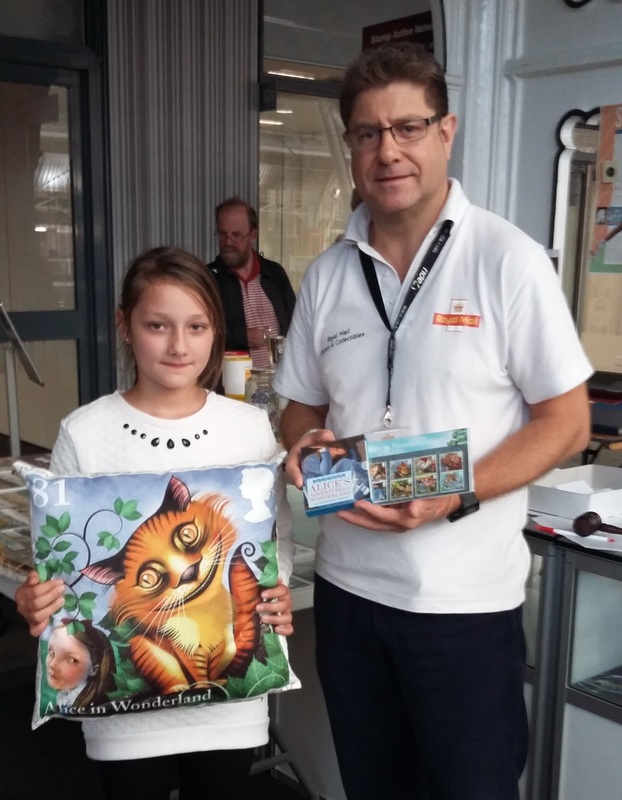 Natalia Miskiewicz from Worcester is Stamp Active’s Young Collector of the Year and received the “Anne Dummer Trophy”, sponsored by Midpex, and a special prize at Autumn Stampex.  She received a unique “Alice in Wonderland” cushion (which was never available to the public) together with an “Alice” book and presentation pack. The prize pack was sponsored and presented by Fraser Chisholm, Head of Marketing at Royal Mail.

The Anne Dummer Award was created by the East Midlands Federation in memory of Anne Dummer who was one of the founders of Kidstamps and devoted much effort in promoting stamp collecting among children. The award is not for who has the best collection, or the best display, or has won the most trophies.  The idea behind the award is to select annually a child who has made a significant contribution to the hobby among young children, by helping and encouraging others, by helping with the running of their local club, or by promoting the hobby in any other way.

Stamp Club Organiser, Jenni Stephens at St Clements Primary School, nominated Natalia, saying “Natalia is currently in Year 5 and joined the Stamp Collectors Club at the beginning of 2015.  Her family originated from Poland so she enjoys collecting stamps from her home country and becomes very excited when she finds one or someone brings one in for her. While she didn’t have any interest in stamps when she joined SCC she quickly bought herself a folder and has spent time at home dividing her collection in themes e.g. Poland, other countries, animals etc.  She shares “doubles” stamps with other members of the club and passes on stamps that may be collected by others. When I commented I put any “glued together” stamps in a separate box she quickly offered to “float” them and return them to me to add to the “swap” collections.  She is always first to offer to put the displays up and to show others how to use stamp hinges – great fun, pity not chocolate flavoured. Natalia has actively taken part in all aspects of the SCC by attending every week, has jointly won the “commitment” prize and won the “design a stamp” celebrating Easter.”

Penny Black and Cuba Winners at Autumn Stampex
Once again, the free children’s auction, run by Stamp Active in the Kids Zone, proved a hit at Autumn Stampex. After completing the activity pack, the young collectors can gain up to 250 points to use in the Stamp Active auction to try to win prizes donated by dealers and friends. Bidding was lively for a wide range of lots including Penny Reds, illustrated covers and stock books as well as some large packets of stamps.  At the end of the auction there was a prize draw for a Penny Black for all the youngsters who took part. This year’s winner was Cuba Maine, aged 11 from London.  The runner up was Wilfred Bazley who received an Autumn Stampex 2016 Smiler Sheet, donated by the Philatelic Traders’ Society. Cuba was presented with his prize by Robin Cassell of Mulready Philatelics who generously donated the Penny Black. 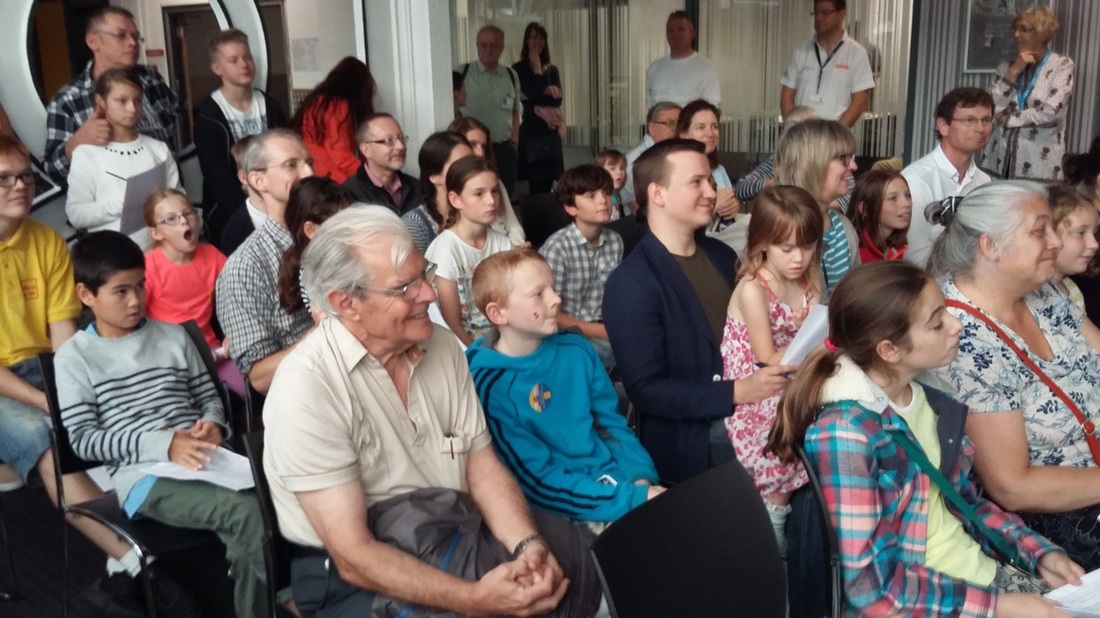 The Stamp Active Auction in Progress
More Winners at Autumn Stampex
There were other prizes on offer in the Kids Zone at Autumn Stampex where the PTS challenged youngsters to guess how many stamps were in a large jar. Every child who visited Stamp Active could have a guess with Wilfred Bazley picking up his second prize of the day, a presentation wallet of a Penny Black and Twopenny Blue, as he was nearest the correct number.  Amadea Stringer from London also pretty close and won the jar of stamps.  The new competition was sponsored by The Philatelic Traders’ Society who also make available the space and facilities at every Stampex to encourage new young collectors.

Prize Draw Winners for “Bring A Child to Stampex”
Stamp Active, the UK’s leading organisation that promotes stamp collecting to children, again offered a free prize draw for any adult that brought a child to the Kids Zone at Stampex. This has become a regular feature of their programme to try to encourage more people to bring their children and grandchildren to the Show.  The winners are Autumn Stampex 2016 were:
1st          Christopher Barker: Royal Mail Year Book 2015
2nd         W Jones, Orpington, Subscription to Stamp & Coin Mart
3rd          Karen Nicholls, Petts Wood, PTS Autumn Stampex Smiler Sheet

“My Favourite Things” Competition Winners
Stamp Active also featured a new competition this year. “My Favourite Things” was a national one page competition to encourage young philatelists to take their first steps into national competitions, sponsored by Isle of Man Stamps & Coins. All of the entries were displayed at Autumn Stampex.  They could choose any country or subject to tell a story of their favourite things. The competition attracted entries from all over the UK.  The winners were:
Aged Under 7
1st          Isla Brash: Four Seasons
2nd         Aria McTaggart: Plants of the World
3rd          Piper Green: The Queen

Aged 10 to 12
1st          Connor Bramham: Military
2nd         Chris Botha: South Africa
3rd          Matthew Kouba: About Me
The Best Overall Entry was judged to be Hannah Stephenson with her display on Penguins. All the prize winners will receive a prize pack from Isle of Man Stamps & Coins.

Information about the Stamp Active Network can be found on their website www.stampactive.co.uk Donations of stamps, particularly of first day covers and thematic stamps would be welcomed by the organisers to: Stamp Active Network, 3 Longfellow Road, Banbury, OX16 9LB
Any further information to be included on this site can be forwarded to KentPhilately@aol.com
Designed by Michael R Thompson.
Please take a look at my very detailed web-sites.
To view - Please click on the web site address
http://www.acmrosh77.jimdo.com
http://www.MallingStampFairs.weebly.com