Hugh Bennet: Kiribati
Formerly the Gilbert Islands, Kiribati obtained independence in 1979 and for many years used the services of the Crown Agents, (later CASCO) but decided to make other arrangements in 2015 for an issue for the Queens 90th Birthday in 2016. Hugh acted as instigator, go-between and project manager between the photographer Ian James, the designer Derek Miller, the Kiribati authorities, the Commonwealth and Foreign Office, the Palace and finally the Printer.
In retelling the events he was able to show unadopted designs, photographic changes, colour proofs without values, correspondence with the Palace regarding the use of photos and permissions needed. Time was of the essence to ensure necessary changes were done quickly, approvals received and printers scheduled, thus the issue was finally despatched using DHL Direct arriving just two days before the issue date.
Further issues followed using Hugh’s expertise and contacts, and these were shown with printers’ sheets, proofs, final issues, miniature sheets and First Day Covers etc. All in all a most unusual and informative display, with much original material, photographs and correspondence in addition to the actual stamps, including full sheets, and covers.

John Ray:  Fiji
John started by giving a brief history of the islands and geographical information. He then went on to detail the Fiji Express service and stamps, and then an extensive display of the “CR” and “VR” monogram issues and the numerous overprints and surcharges made there-on for new values and change of currency. A generous number of perforation and plate varieties were also shown. The KEVII and KGV Key plate issues were well presented followed by the first pictorial set of KGVI, this latter including the KEVIII photograph essays which were adapted for the new monarch after the abdication, etc.
In addition to the stamps John showed a comprehensive collection of Postal Stationery of all types, both unused and used, and finally an introduction to the island postmarks which are popular with collectors. 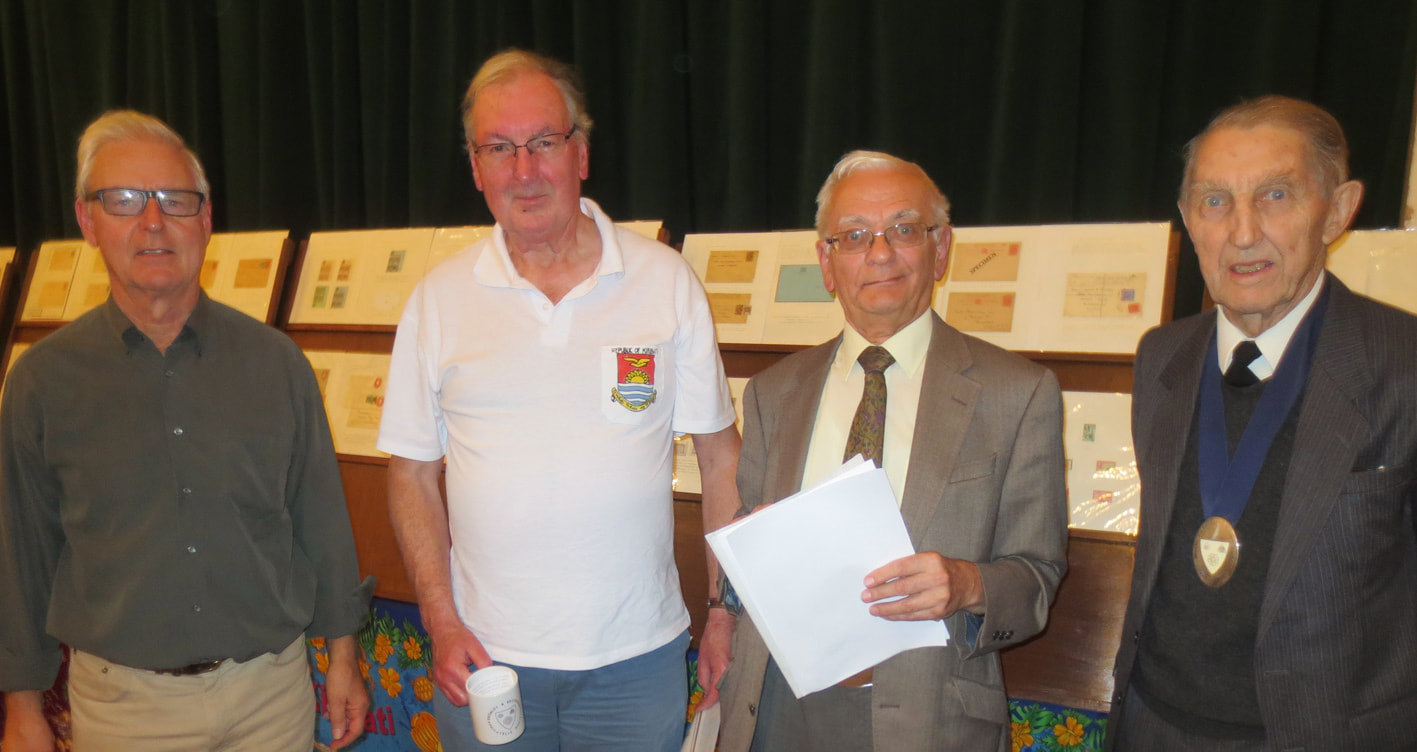 A Wednesday in September 2019
TWO DISPLAYS: THREE COUNTRIES: OVER 400 SHEETS.

The Society has had two unusual displays in September.  The first by John Shaw, FRPSL was of Haiti and Paraguay, and as far as living memory goes the first and only time either of these two countries have been shown to the Society.  Both displays were spectacular containing a wealth of unusual material from early issues, through various revolutions and presidents with essays, trials specimen overprints, numerous overprint errors etc.

The second display was Ceylon  by Cliff Hurst from first issues until it changed its name to Sri Lanka. Again there were early proofs, many overprints with numerous errors, early booklets etc. Another feature was the extensive and comprehensive range of postal stationery cards, envelopes, newspaper wrappers and registered envelopes. In all about 250 sheets shown in three parts, probably the most that has been shown to the soceity for any one country on any one evening.

Members' favourite items included a wide range of material; from Spilsbury PPCs to 1850 Sydney Views on the first issue from New South Wales; the Music of Strauss, Wagner and Delius to the roar of the Tristan da Cunha Volcano Eruption in 1961. Then early Postal Orders of the Straits Settlements and Ceylon, Barbados WWI War Tax issues, and the Inauguration of Nairobi airport by a member who was involved with the Oil Supply terminal.
Also shown was the special pack produced at the 2000 Earls Court Exhibition for the Jeffery Matthews Machin Colour Palette with signed contents.  Finally a wide range of medical and health related thematics.

Birthe King gave her display and slide show: Refugee Camps in Denmark 1945-1949.
At the end of the war approximately 250,000 German soldiers and 250,000 refugees from different European countries were in Denmark and were housed in various camps throughout the country, varying in numbers from 1000 to 35,000 in each.
Birthe’s display included letters and covers to and from many of these camps, and nationalities, accompanied by documents, postcards and photographs.  She commented on the different status and regulations regarding the different classes of refugees, the types of accommodation provided and facilities for families and children etc.
It was a well organised and thought provoking display, clearly and knowledgeably presented.

Chris King gave his display and slide show: Denmark and the Napoleonic Wars.
Not so much a history lesson but a commentary on some events  in which Denmark or the Danes had been involved. Chris set thepolitical scene as it was in 1800, the battle of Copenhagen in 1801 when Nelson famously “did not read the signal with his blind eye," then  the “Continental System” a blockade of Europe denying the British ships entry to European ports. This was followed by the consequences after Trafalgar when the Danish Fleet was coveted by France, and the 2nd Battle of Copenhagen in 1807 when the British seized the Danish fleet.
A review of the Grand Armee itemised its various marches and campaigns, postal markings, etc. Chris explained the significance of Anholt an island at the entrance to the Baltic Sea, seized by the British and designated HMS Anholt in 1809, eventually returned after the Treaty of Kiel 1814.
Finally Chris talked of the D​anish involvement in the “Demilitarised Zone along the French/German border after Napoleon’s defeat at Waterloo for the period 1816-1818. 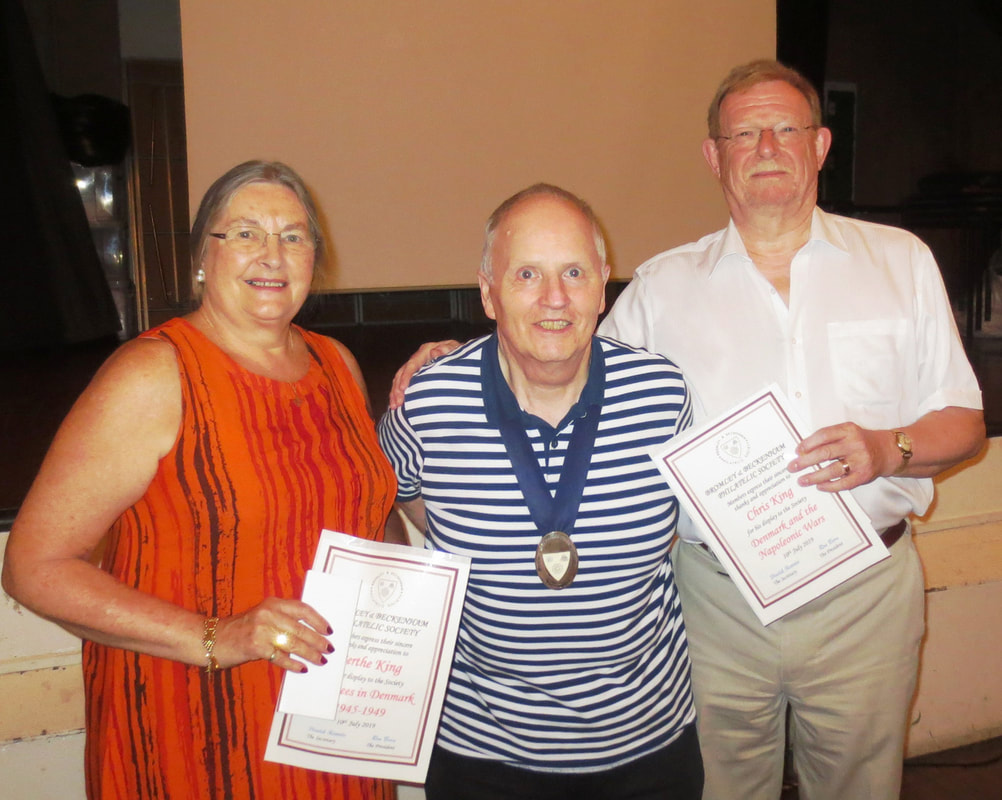 Ron Burn expressed thanks on behalf of the members for two very interesting displays and well presented evening, and presented Certificates and the Society Pen/Pencil sets to both Birthe and Chris.

Twenty members sat down to a very enjoyable annual lunch
at the Langley Park Golf Club on the 5th June.

Some of my favourite Tristan da Cunha by Ron Burn
Ron commenced by giving a résumé of the island’s history, and the personalities involved, before moving on to describe the postal arrangements, such as they were, and the various “Cachets.” Taking each in turn Ron was able to show its use either on original envelopes, or other documents, and photocopies, including colour varieties.
Often these were identified to particular ships or administrative padres responsible for the postal arrangements. Examples included R.M.S. Atlantis in 1934 with type 6, K18 Dutch submarine also on type 6, then 1937/38 types 7 and 8 on Norwegian Survey vessel, another Type 7 “Posted Out of Course,” 1938 Corinthian, another to Cuba and a “SS Queen of Bermuda” ship’s cachet.  During W.W.II. T.D.C. was addressed as “Job 9” and later H.M.S. Atlantic Isle. The famous “Potato” stamps were well represented including a sheet of 35 unused (only 7 sheets known thus), plus others used on covers etc. Design differences were noted.
Ron continued with the issue of overprinted St. Helena stamps in 1952 after years of requesting its own stamps with examples of the ”Hammerhead T” variety in the overprint. Examples of suggested designs by Hugh Elliot were shown (with King George V portrait), and the first dedicated issues of Queen Elizabeth eventually issued in 1954. New designs by Mr & Mrs G F Harris were issued in sterling in 1960 and South African currency in 1961, before the island was evacuated following the eruption by the volcano later than year.
The “exile” period, resettlement survey and eventual return to the island in 1963 were well illustrated by numerous letters, postcards and documents, with comments about the unauthorised and hastily withdrawn, St. Helena Relief Fund overprints: only 434 sets were sold. On return the “Resettlement” overprints on St. Helena issues were made available and Ron was able to show both a block of four and a single on cover of the very rare 3d. with double black.
Other items of particular note included air letters and registered postal envelopes, the first booklet of 1957, followed by those of 1958 etc. More modern items included miniature sheets and thematic sets, where Ron and others in the Tristan Society had assisted in choosing the locally relevant designs and events. Ron also showed a set of Postage Dues with sheet number 1 on each value.
The whole display was delivered with Ron’s usual enthusiasm and personal knowledge of many of the individuals involved during the period covered. All was presented with photos, letters and other documents making it an enormously interesting and entertaining evening.

The second meeting of March was when Bob Higgins, representing Medway Towns P.S., gave a very fine display of Gibraltar, mainly stamps but including some early postal history items. This is the report in the minutes.

Bob commenced with a few pre-stamp items including an 1820 item to Madrid with S. ROQUE three line handstamp and italic "S", then G.B. stamps used with "G" or "A26" cancellations, then most definitive issues in sets mint and/or used including "Specimen" overprints, many positional Plate blocks etc., and some used on covers to confirm postal rates etc. Excellent high values included Specimen overprints, KEDVII issues to £1; and KGV issues to £5 (this both mint and very fine used).

Bob continued with KGVI issues complete and early QEII sets to 1970. A feature throughout was the inclusion of numerous listed and unlisted plate varieties, including the well-known "Monkey of the Rock" "Bird on the Memorial" on KGVI issues, and many later on QEII issues, also re-entries.

The first meeting of March was the annual Competitions evening.

The results were as follows :-

The President invited two members to give their displays in turn, and thanking them afterwards, presented each with a Society mug.

William Morris showed a general run-through collection of Falkland Islands, the Dependencies and South Georgia, mainly mint with much unmounted, and some used. He commented on some of the higher values in the sets, miniature sheets etc, and the attractive thematic nature of the modern issues, especially ships, seals, and others, with local interest including the £1+£1 Rebuilding Fund items.

David Milsted showed Great Britain Army Official overprinted stamps used on 51 covers, mainly internally within the U.K. or to the Army in South Africa during the Boer War, but also some in the opposite direction.

He included a 1st September 1896 first day item, a 28th February 1900 cover used in Ladysmith on the last day of the siege; the scarce QV 6d used with KEVII ½ds and 1ds making 1s rate to an internment camp in Ceylon, and another on a parcel label.

Overprint varieties included the “OFFICIAI” and “narrow L”, and scarce usages such as a pair 2½ds on a Book Post item, and no less than 8 paying the 1/8d rate on a Paymaster cover from Cardiff to Nova Scotia.

Moving to KEVII issues there were two 6d covers to the U.S.A., 3 more on a cover with ½ds and 1ds making 2/0½d rate; a Christmas card to Malta at the 2½d rate; and a ½d used on a registered item to Preston. There was an example of the “long stroke on 2nd ”F” variety.  The whole delivered with David’s knowledgeable commentary.

He was able to comment and illustrate the fact of Bromley being in the General Post, the London Two-penny Post from 1833, and having its own Penny Post, formed in 1837, and a set of Fifth Clause Posts in the Cray villages giving its inhabitants a wide choice of services.

The Thirteenth Annual Dinner of the Society, (87th Birthday), took place at Langley Park Golf Club on 16th January 2019, when 31 members and guests were seated, and enjoyed good food and convivial company.